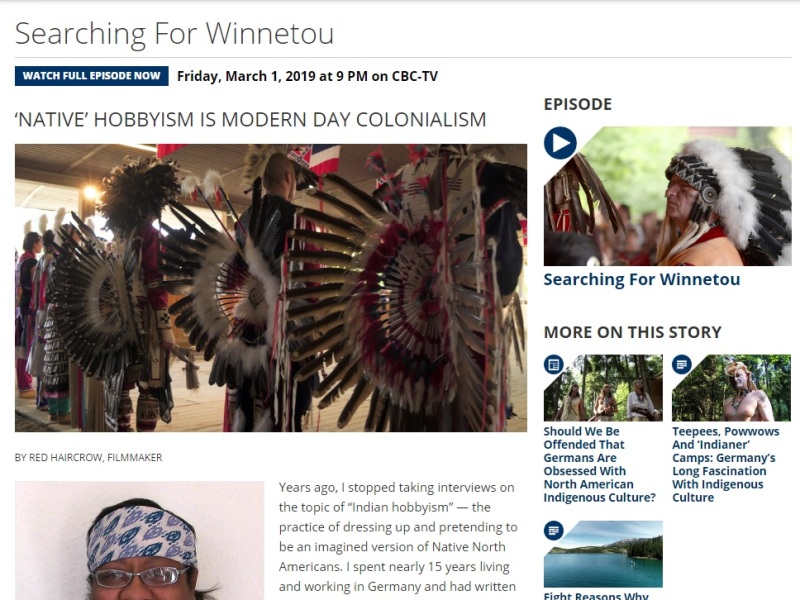 From my article at CBC​, Native Hobbyism is Modern Colonialism. It’s truth for anyone, but especially for a clearly bogus profile who posted a “too bad you can’t understand (racism) its just appreciation” comment to my page.

EXCERPT: “Some Germans are culturally sensitive
In the midst of this racism, there are positive stories that we don’t hear about either. There are Germans who have learned better ways to appreciate and respect Indigenous cultures. Some have stopped dressing up and practice culturally responsible empathy. They recognize the part that white people have played in the exploitation of Indigenous people and want to stop it in all forms. They use their white privilege to improve intercultural understanding and work with Indigenous peoples on Indigenous terms (for example, the Native American Association of Germany e.V.​).

Not all interest in Indigenous cultures and peoples is exploitative. Even though I am against cultural appropriation, especially in the form of hobbyism, I understand there is a wide spectrum of white Germans who become hobbyists. Some do so out of a desire to escape the capitalistic individualism of western societies and some to make a deeper, healthier connection to the environment.”

March 2022  – Special screening at the US Embassy Berlin, Germany.

May 2022 – “Culturitical-Perspectives on Cultural Studies” at Kiel University, Germany.

Songs of the Universal Vagabond (redhaircrow.com)

Come fly with me