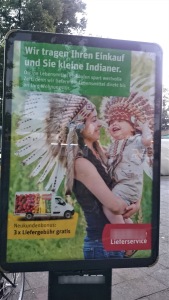 At MOPO, the Hamburger Morgenpost, “Indianer-Kostüm-Verbot Das sagen die Nachfahren amerikanischer Ureinwohner dazu“… the article on recent controversy where a German kindergarten forbid the usage of “Indianer” or American Indian costumes. The decision by the school has sparked debate across the country on cultural appropriation, “innocent” appreciation and colonial practice equaling racism.

It is ironic that Natives and allies have said so all along, with educational campaigns such as #NotYourMascot and #NotYourCostume, but were largely ignored and minimized. However, when a white European person or group dares to actually behave responsibly and stop culturally abusive practices, there is outrage.

Over a decade ago, exactly as our documentary shared, the American Psychological Association (APA) stated:

Side note: It’s noteworthy that the writer Mike Schlink placed my name in quotation marks, which he did to no other European style name in the article. It was auto-assumed my name was fake or a “nickname” because it was different than the Eurocentric mindset, assumption and judge/jury practice we commonly see when white people come across ethnic or other names. Rather disrespectful and subtly racist, when he could have asked or just treated it as any other name.

Songs of the Universal Vagabond